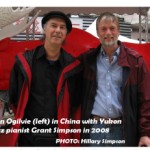 After a couple of weeks in the south (Nanaimo and Vancouver) I’ve landed back in the Yukon and jumped right into Don Ogilvie Week.  Don has come up again and is currently conducting a series of workshops and private lessons and the week will be capped off with a performance with Don and myself.  It’s great to hang out with Don again.  We’ve had some great musical adventures together throughout Canada and an extended tour in China in 2008.  Last year we re-united for a wonderfully successful week of playing and teaching.

Here’s a  clip from our concert last year of Don and I playing Bye Bye Blackbird.
Don Ogilvie and Grant Simpson in concert 2010

It’s great to be working with Don again.  If you’re in the area – come on out to the concert on Saturday, Jan 29th.  Tickets are available through MusicYukon – phone 456-8742 or email steve@musicyukon.com and he’ll make sure you get a ticket.