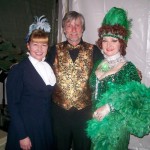 I spent two days in Dawson city last week.  The first day I played for the renowned Gillian Campbell of Klondike Kate fame.  Gillian is an long-time friend and one of the early members of the Frantic Follies Vaudeville Revue.  It was nice to see Gillian and Edward (her ever helping and calm husband) again and to play with her son Richard (drums) and I got to meet and play with Tim Porter.  Tim’s from Nanaimo originally as am I.  It was great getting to know him and getting to play with him.

We performed at the famed “Diamond Tooth Girties Gambiling Casino” which is the first gig I had in the Yukon in 1980.  It felt like I was visiting an old friend to be back there on the Girties stage after all these years.

Also had the chance to hang out with Peter Menzies who is one of the MusicYukon board members, President of KIAK (Klondike Institute of Art & Culture) and one of the great teachers and mentors in the education system today.  Peter is busy with so many things it’s amazing to just hang out with him and watch what’s going on around him.  An inspiration to say the least.

Duncan Sinclair drove up and joined me for a meeting of Dawson musicians.  We talked about MusicYukon and discussed ways we could work together to make some things happen.  From the meeting forward, we were able to create two or three things that move in the right direction and there are plans for me to return to Dawson in March to perform and work with some of the music teachers and musicians in Dawson.  I really look forward to it.

It was great to get to hear the Girtie’s Band play a couple of sets on Friday night and to get to hang out socially with some of the musicians there.

Coming up in the next month or so are a few performances and workshops I’ll be involved with.  I’ll be posting them as they come up.